Automated draft picks happen whenever the sim has not received a draft card from you (either because you didn't make one or because it didn't transmit successfully to the server). As a 'live' owner the sim expects to have a draft card to process. When it doesn't, as a safety measure the sim creates a card for you using the same logic it uses to create cards for league owned teams. This helps plug any holes on your roster and keeps your team viable. It's a design feature based on our years of experience with owners and their teams.

Unfortunately, you can't reverse the draft results. There are far too many things at stake for others across the league. However, we understand you probably don't want many of those automated picks. If you go to the Contracts Tab on the Manager Controls Window you'll note that automated draft picks are coded with a yellow 'D' to distinguish them from others. If there are still draft events left, you can use the 'Drop Without Signing' button (In the Contract Signing Window as shown below) to clear any players coded with 'D' to tell the sim to drop these players before the next draft event. This will give you more room on your rosters. If the draft is over you can drop 'D' coded players without signing them. Beware that any players coded with a 'D' that are neither signed nor dropped will have their contracts handled by the sim at the contract signing deadline. 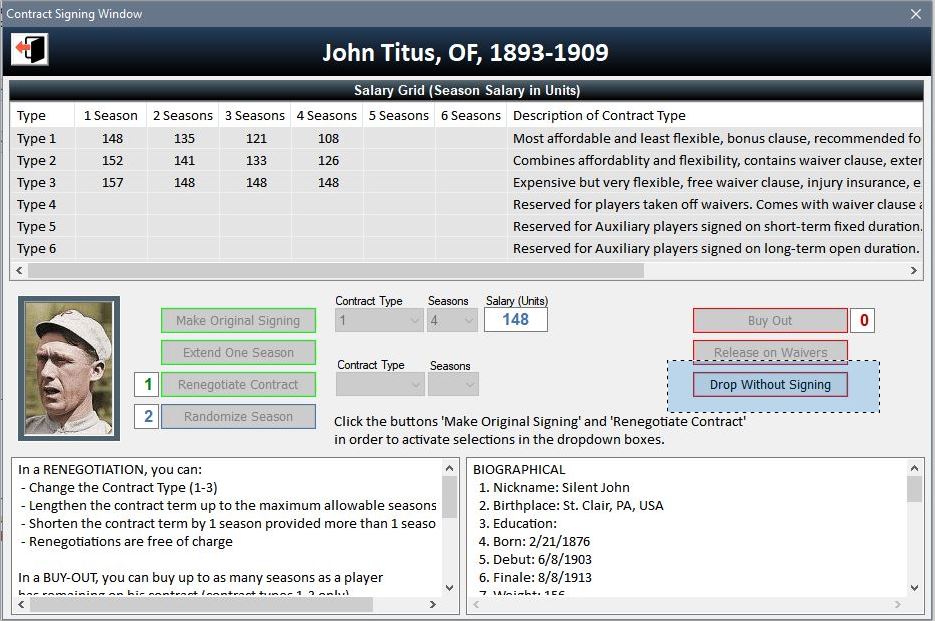 Contract Signing Window: Note the highlighted region where you can click the button to drop a 'D' Coded Player.
Retrieved from "https://www.nostalgiabaseball.com/nsbguidemediawiki/index.php?title=Automated_Sim_Draft_Picks&oldid=415"