Difference between revisions of "Negro Leagues"

Version 7.0 adds every stat line for every player between 1920 - 1948 for the seven Negro Leagues recognized by MLB as major leagues. Even though we won't be simulating Negro league teams as such due to their erratic and sparse schedules, adding every player's stats (1) makes possible a complete league normalization profile for accurate adjustments, and (2) offers the possibility of accurate career (CAR) stats for reliable Career Mode simulations.

Negro League stats have not been as thoroughly researched as conventional MLB stats. This work is ongoing, and painstakingly slow, built from game level up by the use of newspaper box scores. Batter's strike outs, and often pitcher's home runs allowed, are unavailable. And there are many seasons for which no defensive stats exist. So we created a modeling technique based on player tendencies and the stats we have. If we couldn't model missing stats based on adjacent seasons, we used the AL/NL tendencies for that year to create a baseline true to the era.

Many photos are missing, too, although a surprising number are available, and we have included all we could find.

During the tenure of the Negro Leagues there were several teams comprised of predominantly Cuban players who did not have a home park. They were "barnstorming" teams, or traveling teams, and played only in their opponent's parks. The Cuban Stars East (CSE) and Cuban Stars West (CSW) were the most notorious barnstormers.

Our guiding philosophy was "full integration" since this is precisely what was missing in segregated baseball. Full integration means that we are not offering a "special" way of including these players, like a supplemental draft or minor league system, for example. We wanted them to be treated like all other players as a matter of justice. Therefore they are part of any drafting pool spanning the years 1920 - 1948, priced the same as all other players. We do not treat them as AAA, or AA, that is, as if they were a level or two down from MLB class players with performance penalties. Please understand this as a philosophical decision. While it's true that many of these players would not have been of sufficient quality to play in MLB at the time, we are choosing not to adjudicate this difference and simply let them play with the stats they accrued during their careers. After all, some of them would have outperformed many of their white counterparts, too. We have already crossed this bridge by including white players in the early decades of MLB, many of whom would be unable to play competitively in today's game. We include them without question.

Now, the choice for "full integration" means that some of our leagues will have no access to them on account of the way they are designed--for example, our Dead Ball leagues or a league like Modern Times, which uses only players debuting from 1950 onwards.

How Can I Tell if Someone Played in the Negro Leagues?

You will see a superscript '1' appended to the player's name when researching draft pools, waiver wire, and the Auxiliary Roster. Once a player reaches your team, the '1' no longer shows. We use it to make Negro League Players easily recognizable. The following example shows an Auxiliary Roster stocked with Negro Leaguers. 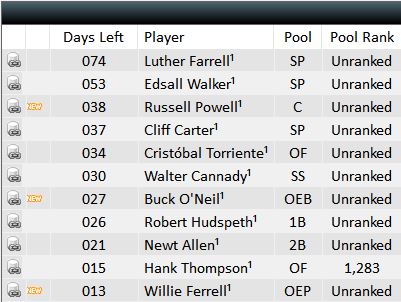 When researching in the database Negro League players are also detectable by their league (and sometimes city) abbreviations.

Because these players played far fewer official league games than their white counterparts, their seasonal stat totals are markedly lower. However, if you draft them in Career Mode you will have enough plate appearances to rely on them as position players. We recommend this! A good many of these players are prized draftees.