I thought I'd keep a little record here on my discoveries as I work on Negro Leagues. This is a learning experience for me, and one for which I am glad.

In 2020 the MLB Commissioner announced plans to include 7 of the so-called Negro Leagues (the term "negro" is outdated and I wish MLB would use a different name, but I have resigned to the terminology). Each of these 7 would have been considered "major" leagues in their day, populated by the finest Black players. Here they are:

There is a history behind these leagues, obviously. The last 3 are the most important because of their longevity and relative stability.

NSB will include every known player line from each of these 7 leagues because they are retroactively considered official MLB leagues.

Normalizing stats from these leagues is a major challenge for a number of interesting reasons. For one things, not all teams played in their own parks. The Eastern Cuban Stars and the Western Cuban Stars (and a few other teams as well) played all their games on the road. They were traveling teams without a home. No matter how much research is completed, they will never have home/road splits.

Also, there are many players for whom we know nothing about their batting or throwing hand (and we are not likely ever to know this). They will be coded with a 'U' for 'Unknown'.

There are also a good many players for whom a year of birth is not known, which means that we do not know their age from season to season. In these cases the AGE field will be left blank.

A number of new cities have to be added to our collection. Many negro league teams played in cities never used by traditional MLB teams. For example, Birmingham, Little Rock, Montgomery, Harrisburg, Memphis, and Wilmington to name a few.

Schedules are HIGHLY erratic with a sometimes very large difference in games played between some teams and others.

Because relatively few games were played each season, it will often be advantageous to use career stats. So I am working on introducing a career database to our system. Otherwise, it's difficult to see how most Negro leaguers could qualify for our traditional player pools.

The good news is that, in time, we should be able to accomplish realistic modeling for these players. What we will never know is how to assess them vis-a-vis white players of their era. But since NSB is committed to the historic game, my thinking at this point is NOT to diminish their performances by treating them like AAA or AA players as some other sims do. At NSB we have already started on this generous course with dead ball players. That means that we can expect Negro leaguers to play competently, and sometimes excellently, alongside other players in our database.

As of today I am leaning toward a model of "full integration." That means that these players will appear in our traditional pools and not be treated as a special case (e.g., candidates for Auxiliary Rosters or a special waivers collection). I am considering making the BEST of them perpetual free agents. More anon.

Beyond the 7 "Negro Leagues," we will be expanding the NL back to its inception in 1876. From the start NSB made 1893 the cutoff for old-timers because it was the first year of the 60' 6" mound distance from home plate. However, the recent addition of Dead-Ball-Era-only leagues has put some strain on player supply and stimulated further thought about this limit.

So we are adding all players from 1871 - 1892 to the system. This means that the NA (National Association), AA( American Association), UA (Union Association) and PL (Players League) all must be added, each with their own normalizations. We are also adding players from the FL (Federal League of 1914-1915). This data will enrich the player pools of the Dead Ball era.

Here's a listing of all 14 leagues included in version 7:

As work continues on v7.0 and the inclusion of Negro Leagues, decisions have to be made in order to code my way to the finish line. One decision I made this week will change the way we sign contracts. So, I wanted to say a thing or two about it by way of anticipation.

As you might remember from an earlier post, V7.0 will come with a career database. Every Negro League player will have a weighted career line of historical stats published. This is necessary in order to deal fairly with the Negro Leagues because those players don't reach the defined thresholds for drafting pools. When you go to sign a player you will have the option of signing a "career contract" for TWO FULL seasons weighted to 625 plate appearances for batters and 225 IP for pitchers. Or, you can sign players for longer than two seasons and get the usual ups and downs of seasonal performance with lesser quantity of play. Using this method we can ensure that Negro League players can play on a full-time basis and not be relegated largely to Odds and Ends pools.

I've got the basic stats in place for the Negro Leagues. Gobs of work to do yet to make them playable, but I thought I'd post an image of a couple star players. Note the Career (CAR) line that now sits at the bottom of the historical stats. Career lines will be set to 225 Innings Pitched and 625 Plate Appearances. 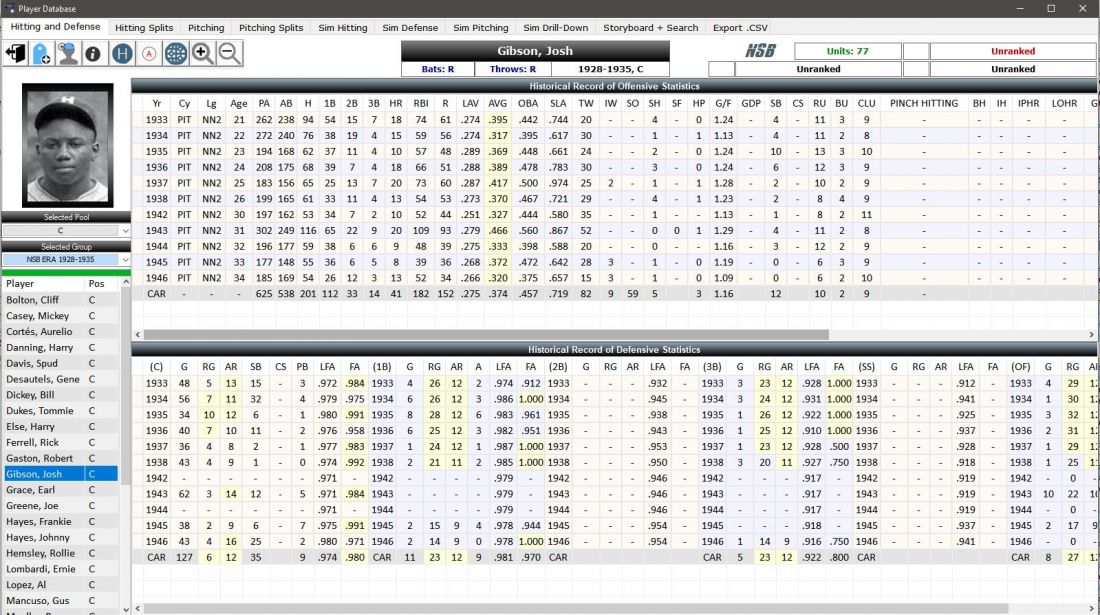