How Do I Make Sure I have Enough Roster Space?[edit]

Roster sizes are absolute and cannot be stretched. There are different roster caps for different leagues, and it's essential to pay attention to this because the commissioner will not return lost players to your roster. To determine whether you have space to receive more personnel, have a look at the following sequence enacted whenever a game event runs: 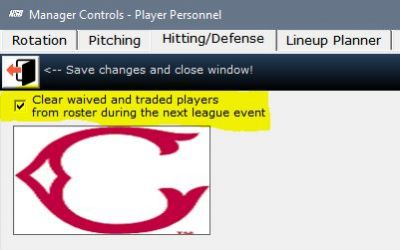 To ascertain roster sizes for your league, go to the Main Screen of the Software and click the 'Definitions' Button.

One of the most important events in any league is the Pre-Draft Transactions Event. It runs a day or two before the first iteration of the draft. In this event you have the opportunity to release all players who qualify to be released. This is critical especially if you are playing in a league with small roster limits. If you miss this event you may not have enough room to hold your newly drafted players.

ADVICE: If you need reminders of upcoming drafts, sign up to receive SMS/TXT reminders on your phone by clicking the 'Logo/Txt' Button on the mail toolbar.