Our philosophy of "full integration" means that Black Baseball Players 1920-1948 play at full strength, not as AA or AAA Levels!

Draft and Manage players from all eras in our 'live' leagues or design custom leagues from MLB seasons from 1893 on.

Premium support offered to all members.

Get More Info about the Baseball Sim Game for PC! 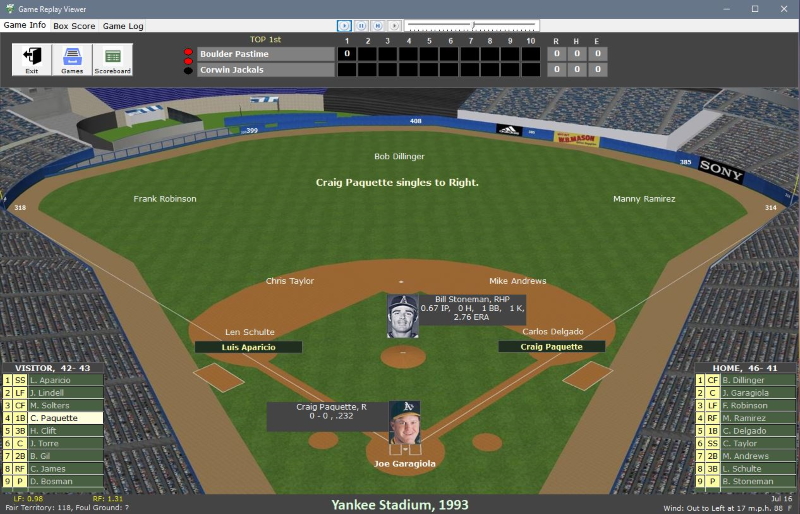 What Should You Expect in a Baseball Sim Game?

Baseball board games like Strat-O-Matic, APBA and Pursue the Pennant were popular when I was growing up in the 70s. To play we used packs of baseball player cards and rolls of the dice. I used to play with my neighbor Eddie. We were both introverts, so this seemed like an ideal after school ritual. Over time, I created my own baseball sim game with dice, trying to emulate what I had learned.

The advent of the personal computer in the 80s (I was one of the first to buy one at an outrageous price!) opened up new possibilities for baseball simulation. During that time I taught myself how to code in BASIC language on a DOS system with no hard disk, just two "floppy drives" as we called them. There were a few catastrophes as I wrote code (like corrupt disks and forgetting to save my work), but I always came back for more. It seemed natural to take some of what I learned from cards and dice and move it into the universe of bits and bytes. Though it would take another 15 years, Nostalgia Sim Baseball is the outcome of my twin fascination with baseball and code-writing.

But what should one expect in the best PC baseball simulation game? While I cannot answer that question objectively, I'd like to share four basic convictions.

First, a sim should aspire for accuracy. Accuracy is no simple matter. How should we measure it? Each MLB baseball season (and for most of baseball history each league of each season) is its own veritable universe of interrelated data. To accurately sim the 1962 MLB season with its many stat splits (left/right, home/road, bases empty/runners on etc.) is challenging enough. But imagine putting together teams of players collected from all eras of baseball history and playing them against one another in ballparks other than those they actually played in. This takes complex modeling based on real and imagined "norms" and "means." A good sim doesn't just throw raw batting and pitching stats at one another. It must (a) evaluate each player's stats against his own historical league norms, then (b) construct a fictional environment based on the parks and players gathered to play in your selected sim league. Only then can you build a set of reliable probabilities to simulate a plate appearance between Willie Mays and Clayton Kershaw in the Baker Bowl in 1915 with the bases loaded. In other words, a good baseball sim game handles multiple universes of interrelated data responsibly to achieve accurate simulation.

Second, a baseball sim game should offer many ways to affect outcomes. This includes a generous set of player and manager controls, the freedom to build lineups, the ability to move in and out of ball parks, access to players (through waivers, trades, minor league rosters or equivalents, drafts, free agency, and so on), and fiscal management of some kind.

Third, a good pc baseball simulation cares about baseball history. Stats aren't everything. The sim should provide an opportunity to learn about the players of yesterday and the way they played the game. In a postmodern world, narrative is an important part of the baseball experience. Think for a moment about the way modern park designers promote the stories of their franchises. Places like "McCovey Cove" and "Ashburn Alley" call to mind the past and incorporate it seamlessly into the present. Nostalgia Sim Baseball tries to honor the storied history of the game. We have more to do on this, and it's a constant challenge, but helping members connect to baseball history is one of our core values.

Finally, the best baseball simulation games create a sim community. Scientific modeling and historical narratives alone cannot create the human connections we long for. Sharing our sim experiences (the good, bad, and ugly) with others introduces a needed human element to baseball simulation. A good sim creates conversation around the water cooler.

I joined the community of Nostalgia Simulation Baseball several years ago. It's an addictive game, each season bringing new challenges. NSB allows a multitude of sophisticated controls over all aspects of managing a baseball team. And the weekly reports and box scores will satisfy the most insatiable statistics appetite.

"A wildly addictive – extremely fun – superlatively well-coded sim game – with tons of statistical information for your inner analytical child to sift through.”

"I'd like to say how much I enjoy NSB. I've played other fantasy baseball games but NSB is the best. You get to choose players from the 1890's up to today. You get to set the line ups and pitching rotations in different ballparks. Many of the other managers have played NSB for several years and they're both friendly and helpful. Again, NSB is the BEST."

"NSB is the absolute best baseball simulation out there. I've tried a few other simulations and none touch what NSB provides. For those with a passion towards baseball and all it's history, stats, and entertainment... this is the game for you!"